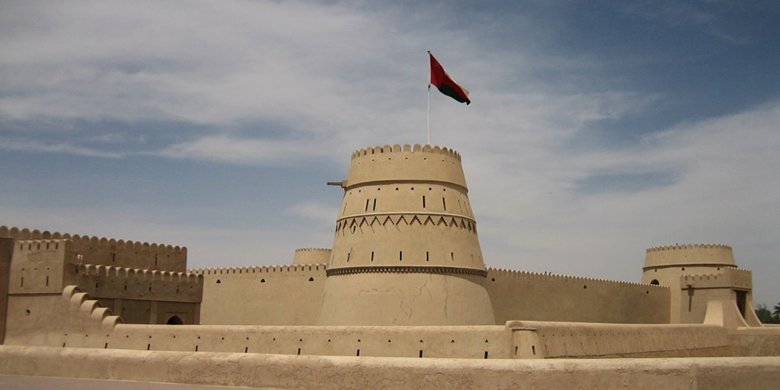 The town of Al-Buraymi is an oasis town in northwestern Oman, on the border of the United Arab Emirates. An adjacent city on the UAE's side of the border is Al Ain. For many decades there has been an open border between Al-Buraimi located in Oman and Al-`Ain (UAE). Effective from 16 September 2006, this border has been relocated to an area around Hilli which is around 8 kilometers from the traditional open border. The traditional border near Al-`Ain City is now closed to all except to those with valid visas (GCC nationals require no visa).

The surrounding landscape of Al-Buraimi differs vastly from that of Al-`Ain, consisting mainly of wide open gravel plains and sharp jutting rocks (The sohar gap found to the east of the Buraimi township is a good example of this), Samr (Acacia spp.) and Ghaf (Prosopis cineraria) trees are fairly common on these gravel plains.

Al-Buraimi is considerably smaller than the adjoining city of Al-`Ain and is visibly less affluent. Streets in Al-Buraimi are not named and development could be considered "piecemeal" with large villas often appearing some metres from the roads, and footpaths do not occur away from the main streets.

Before the relocation of the border it was fairly common for expatriates from Al-`Ain to rent villas and apartments as they were roughly 50% of the cost of an equivalent villa/apartment in Al-`Ain, however the change in Border policy has led many of these expatriates to relocate to Al-`Ain due to long waiting times at the border checkpoints during peak traffic hours.

Transport in and around Al-Buraimi is by taxis, which like the majority of taxis in Oman are coloured orange and white. Drivers accept payment in both Omani Riyals(OR) and United Arab Emirate Dirhams (AED), a trip within the township of Al-Buraimi will generally cost no more than 5 AED/0.5 OMR. A trip to Mahdha may cost over 10 AED / 1 OMR.

Al-Buraimi, like the rest of Oman, features many historic forts in varying condition. The largest mosque in Al-Buraimi is the Masjid Qaboos, named after the Sultan Qaboos. There are ruins of ancient hovels and a fort in Al-Buraimi.

Al-Buraimi was part of Oman from early historical times from around 600 AD the Azd tribes of Oman occupied the area. Then Al-Buraimi town was abandoned in the 700s. Al Nuaimi tribe, the original people of the town, rebuilt and ruled it in the 1800s to the 1950s. It had only two rulers, Sheikh Sulá¹­an bin Mohamed bin Ali Al-Hamood Al Qurtasi Al Naimi, then Sheikh Saqer bin Sulá¹­an bin Moá¸¥ammed Al Hamood Al Qurtasi Al Naimi. The late president of the United Arab Emirates, Sheikh Zayed bin Sulá¹­an Al Nahyan, was born in Al-Ain and lived in Abu Dhabi town but was brought back to Al-`Ain by his mother, Shaikah Salaamah, following the assassination of his father, Sultan bin Zayed in 1928. Zayed was raised in a fortified house in the Muwaiji district of Al-`Ain. Since 1761, Abu Dhabi was ruled by sheikhs of the Al Abu Falah dynasty.

The community of Al-Buraimi is probably best known as the result of an incident known as the "Buraimi Dispute", an episode that contributed to the confirmation of Zayed as the most astute leader in the region.

The Buraimi Dispute arose from Saudi Arabia's claim, first made in 1949, of sovereignty over a large part of Abu Dhabi territory where oil was suspected to be present and an area in a 20-mile circle around the centre of the Buraimi Oasis. The Saudis relied on historical precedent (the oasis had once been occupied by ancestors of the Saudi King Abdul Aziz ibn Saud) and tax records. Their claim was backed by the American oil company Aramco[citation needed], which provided logistics and research to support Saudi Arabia. In 1952 a group of some 80 Saudi Arabian guards, 40 of whom were armed, led by the Saudi Emir of Ras Tanura, Turki bin Abdullah al Utaishan, crossed Abu Dhabi territory and occupied Hamasa, one of three Omani villages in the Oasis, claiming it as part of the eastern Province of Saudi Arabia. The Sulá¹­an of Muscat and Imam of Oman gathered their forces to expel the Saudis but were persuaded by the British Government to exercise restraint pending attempts to settle the dispute by arbitration. A British military build-up took place, with 100 Trucial Oman Levies (later known as the Trucial Oman Scouts), a British-backed force based in Sharjah, 300 Aden Protectorate Levies, 7 armoured cars and 14 Land Rovers supported by 4 Lancaster bombers (2 based at the British airbase in Sharjah and 2 at Habbaniyah), 3 Ansons in Bahrain and a section of Meteor fighters based in Sharjah. These were supported by two frigates. These forces were used to blockade the Saudi contingent, with attempts to reinforce them seeing truck convoys and camel trains from Saudi Arabia being turned back.

A standstill agreement was implemented and, on 30 July 1954, it was agreed to refer the dispute to an international arbitration tribunal. Meanwhile, Saudi Arabia embarked on a campaign of bribery to obtain declarations of tribal loyalty on which its case was based. This campaign even extended to Shaikh Zayed bin Sulá¹­an al Nahayan, brother of Sh Shakhbout, Ruler of Abu Dhabi whom he would later overthrow in 1966. Zayed reportedly turned down an offer of $20,000,000. In 1955 arbitration proceedings began in Geneva only to collapse when the British arbitrator, Sir Reader Bullard, objected to Saudi Arabian attempts to influence the tribunal and withdrew. A few weeks later, the Saudi party was forcibly ejected from Hamasa by the Trucial Oman Levies. Together with a few refugee sheikhs and their families, the Saudis were taken to Sharjah and dispatched to Saudi Arabia by sea. The dispute continued to rumble on for many years to come until settled in 1974 by an agreement, known as the Treaty of Jeddah, between Sheikh Zayed (then President of the UAE) and King Faisal of Saudi Arabia.