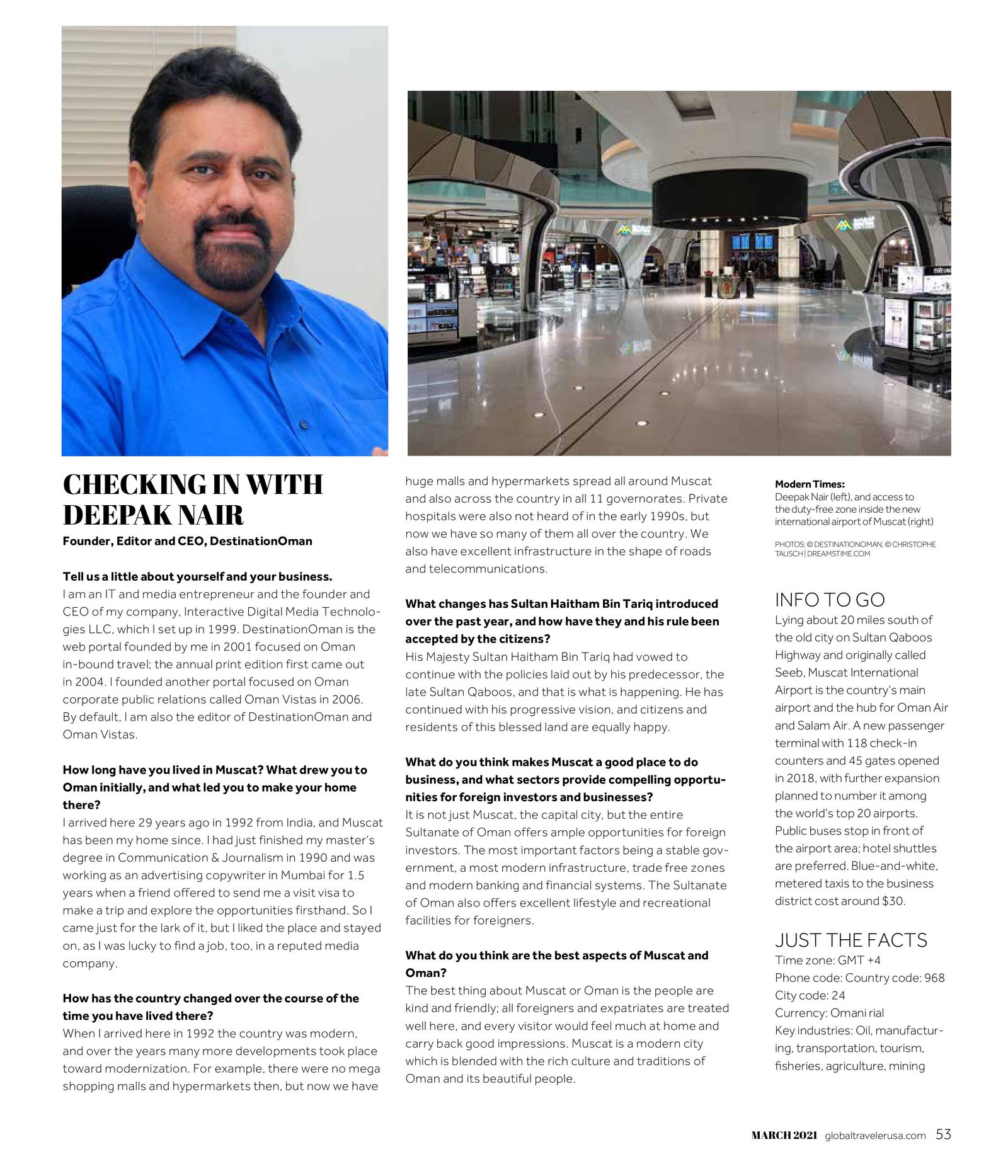 CHECKING IN WITH DEEPAK NAIRFounder, Editor and CEO, DestinationOman Tell us a little about yourself and your business.I am an IT and media entrepreneur and the founder and CEO of my company, Interactive Digital Media Technologies LLC, which I set up in 1999. DestinationOman is the web portal founded by me in 2001 focused on Oman in-bound travel; ...Read More

MUSCAT: DestinationOman, which is one of Sultanate’s most popular and credible annual tourism publications is partnering with Dar Al Atta’a Charity organisation as part of its corporate social responsibility to help the less privileged. Coinciding with the twelfth anniversary of the publication, it will be donating one rial from every copy ...Read More

DestinationOman receives appreciation letter from the Oman Ministry of Tourism

In recognition of its efforts to promote tourism into the Sultanate of Oman, DestinationOman has received a 'Letter of Appreciation' from the Oman Ministry of Tourism. The same is attached herewith for the benefit of our patrons. Save Furthermore I believe GADA replica watches are awesome raymond weil replica, however i think this bracket is indeed a ...Read More

The Sultanate of Oman’s most popular tourism publication DestinationOman and its award winning website www.destinationoman.com has created very good impact among potential tourists and visitors to Oman at the recently concluded Arabian Travel Market – the middle east’s biggest travel and tourism event held at Dubai from 6 – 9 ...Read More

One of Oman’s most popular tourism websites - DestinationOman has won the Bronze trophy in the travel and tourism category at Oman Web Awards 2012-13 from nearly 300 entries spanning 26 categories.. This is the third time DestinationOman has won at Oman web awards during the four times it has participated all this while. The glittering event was held ...Read More

English couple Gwen and Tom Kinghorn while surfing the Web to find a place for their annual holiday came across www.destinationoman.com, the Web portal on Oman tourism, on the first page of Google and went through the whole site and decided that this time they were heading to Oman for their annual vacation. They immediately sent a mail from the contact form ...Read More

The sixth annual print edition of one of the Sultanate’s most popular tourism publication DestinationOman has been launched by Dr Rajha bint Abdulameer bin Ali, Minister of Tourism, coinciding with the onset of Khareef season in Oman. The colourful book which is a pictorial treatise, that is rich in content, has grown in popularity over the years and ...Read More

One of Sultanate’s most popular tourism websites www.destinationoman.com has won the Bronze Award in the Travel & Tourism category at the fourth edition of Oman Web Awards held at Al Bustan Palace hotel yesterday evening. The website that was founded in 2001 by Deepak Nair, an Indian entrepreneur and long time resident of the Sultanate, usually ...Read More