The sixth annual print edition of one of the Sultanate’s most popular tourism publication DestinationOman has been launched by Dr Rajha bint Abdulameer bin Ali, Minister of Tourism, coinciding with the onset of Khareef season in Oman.

The colourful book which is a pictorial treatise, that is rich in content, has grown in popularity over the years and is considered as a reliable source of information on Oman tourism. Acclaimed international photographers Jaap Croese and Paulo Bizarro share their talent in the new edition with some spectacular photographs of the Sultanate, along with other equally fascinating pictures credited to Bait Al Zubair, and the book’s founder Deepak Nair who conceived this much sought after publication in 2004.

In a foreword to the publication the minister says: “The Sultanate of Oman is now labelled as one of the most interesting countries anyone would like to visit and explore, for its culture, customs, traditions and natural beauty. Tourism, though a relatively recent development here has made great strides in a short period and is poised to contribute to the national economy in a big way in the coming days.”
She observed: “Oman has a rich cultural heritage dating back to thousands of years and Omani merchants had built ships and sailed to unknown distant lands for trade centuries back. It has developed its own arts, crafts and architecture. The famed historical forts and castles of Oman are testimonials to the architectural splendour of a bygone era. The traditional Arab hospitality extended by Omanis to guests from all parts of the world is well known and continues as a timeless tradition. Moreover, it is one of the safest destinations in the world for tourists from the far and the near.” 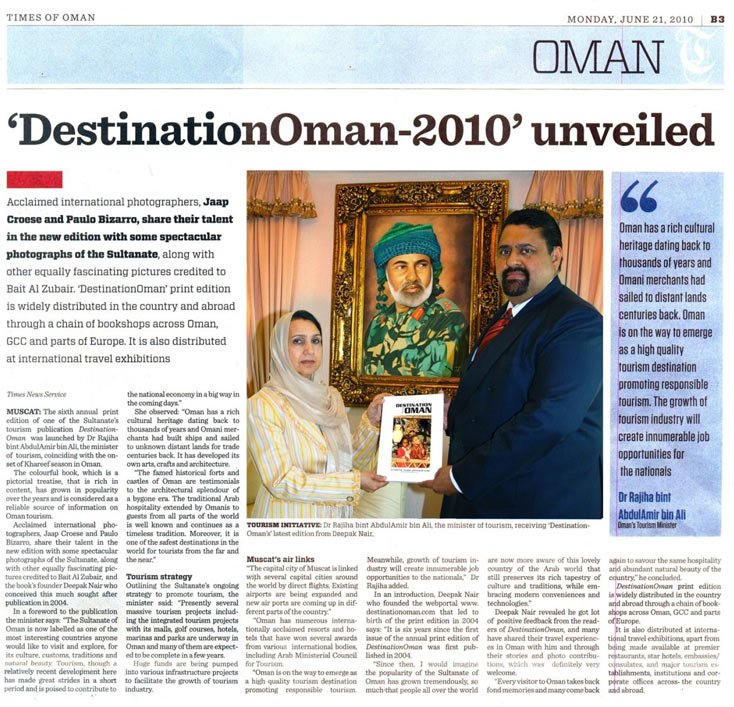 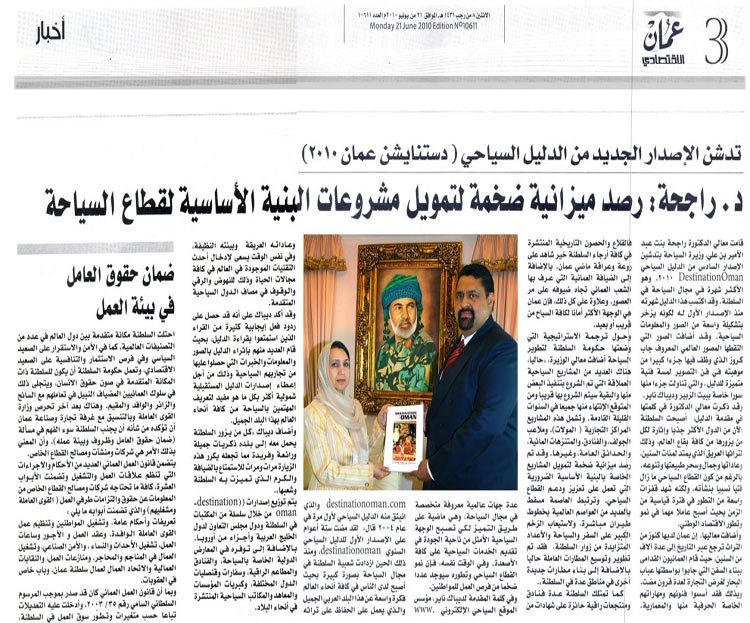 Outlining the Sultanate’s ongoing strategy to promote tourism, the minister said: “Presently several massive tourism projects including the integrated tourism projects with its malls, golf courses, hotels, marinas and parks are under way in Oman and many of them are expected to be complete in a few years. Huge funds are being pumped into various infrastructure projects to facilitate the growth of tourism industry. The capital city of Muscat is linked with several capital cities around the world by direct flights. Existing airports are being expanded and new airports are coming up in different parts of the country.”

“Oman has numerous internationally acclaimed resorts and hotels and that have won several awards from various international bodies, including Arab Ministerial Council for Tourism. Oman is on the way to emerge as a high quality tourism destination promoting responsible tourism. Meanwhile, growth of tourism industry will create innumerable job opportunities to the nationals”, Dr Rajha further noted.

In an introduction, Deepak Nair who founded the webportal www.destinationoman.com that led to birth of the print edition in 2004 says: “It is six years since the first issue of the annual print edition of DestinationOman was published in 2004. Since then, I would imagine the popularity of the Sultanate of Oman has grown tremendously, so much that people all over the world are now more aware of this lovely country of the Arab world that still preserves its rich tapestry of culture and traditions, while embracing modern conveniences and technologies.”

Deepak Nair revealed he got a lot of positive feedback from the readers of DestinationOman, and many have shared their travel experiences in Oman with him and through their stories and photo contributions, which was definitely very welcome.

“Every visitor to Oman takes back fond memories and many come back again to savour the same hospitality and abundant natural beauty of the country”, he concluded.

DestinationOman print edition is widely distributed in the country and abroad through a chain of bookshops across Oman, GCC and parts of Europe. It is also distributed at international travel exhibitions, apart from being made available at premier restaurants, star hotels, embassies/consulates, and major tourism establishments, institutions and corporate offices across the count.

What we have here's Valjoux 22 powered audemars piguet royal oak replica chronograph, and it is originating from Doxa. Dating back 1940, this franck muller replica piece would’ve certainly been extra-large because of its time at 38mm across, and also the situation is allegedly a Spielmann.