Oman is a land of rich history and fascinating culture that dates back well over 5000 years.

The relics of one thousand forts and watchtowers stand as sentinels over Oman’s now peaceful landscape. While many have been left in ruins, a great number have been beautifully restored to their former glory and are open for visitors to explore. Nizwa Fort, perhaps Oman’s most famous heritage landmark, is a great example of this. Surrounded by the equally alluring Nizwa Souk, this impressive monument to Omani architecture features mazes of passageways linking rooms of museum displays beneath its grand central tower. 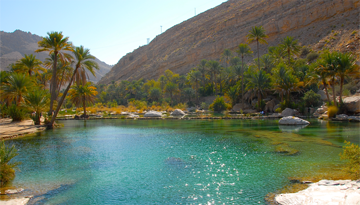 Venturing further back into history, sites such as Sumhuram and Ubar – thought by many to be the famed Atlantis of the Sands – beckon visitors with their echoes of an ancient way of life.

Of course, modern Omani culture still carries many of the traditions of bygone eras. It remained effectively underdeveloped until 1970, when His Majesty Sultan Qaboos ascended to the throne and began what many called the “Blessed Renaissance”.

Oman is often referred to as the ‘true Arabia’ because its ancient culture has been so beautifully preserved. Here, you’ll still find souks selling silver and frankincense, cattle and pottery, in the same way as has been customary for thousands of years.

The Omani people themselves also have a well-deserved reputation for being amongst the world’s most hospitable. Their smiling faces testify to their eagerness to share their unique culture with visitors, and most travellers to Oman will have at least one story of remarkable local hospitality.

It is this warm, peaceful culture that has created a society that consistently ranks Oman highly on the annual Global Peace Index, as well as being named the world’s 9th safest tourism destination by the World Economic Forum in 2015.

Recent archaeological discoveries suggest that humans settled in Oman during the Stone Age, more than 10,000 years ago.