English couple Gwen and Tom Kinghorn while surfing the Web to find a place for their annual holiday came across www.destinationoman.com, the Web portal on Oman tourism, on the first page of Google and went through the whole site and decided that this time they were heading to Oman for their annual vacation. They immediately sent a mail from the contact form of DestinationOman seeking help and suggestions in making their trip memorable, according to a press release.

The staff at DestinationOman reverted back with their suggestions and also recommended the hotels where they could consider staying, the places they could visit and tour operators who could give them a good deal among others. Based on these inputs, Gwen and Tom came to Oman for a week’s holiday booked through Cox and Kings travel agents and stayed at Barr Al Jissah Shangri-La in Muscat from where they went around Oman using the services of Zahara Tours. At the end of their holiday, they called DestinationOman office to thank the team for making their holiday a memorable one. They also requested for a few copies of DestinationOman print edition, that they could keep as a souvenir and also gift to their friends. They also contributed the pictures they took of the tourist attractions in Oman to DestinationOman.

Another Australian couple, Barbara and David, also visited Oman for a week’s holiday inspired by DestinationOman Web portal that enjoys high ranking and visibility on major search engines like Google.

To complement the website, and due to constant requests from the visitors to the portal, DestinationOman annual print edition was launched in 2004. Since, then every year the book that is pictorial treatise on Oman has established itself as one of the popular guides on Oman tourism. 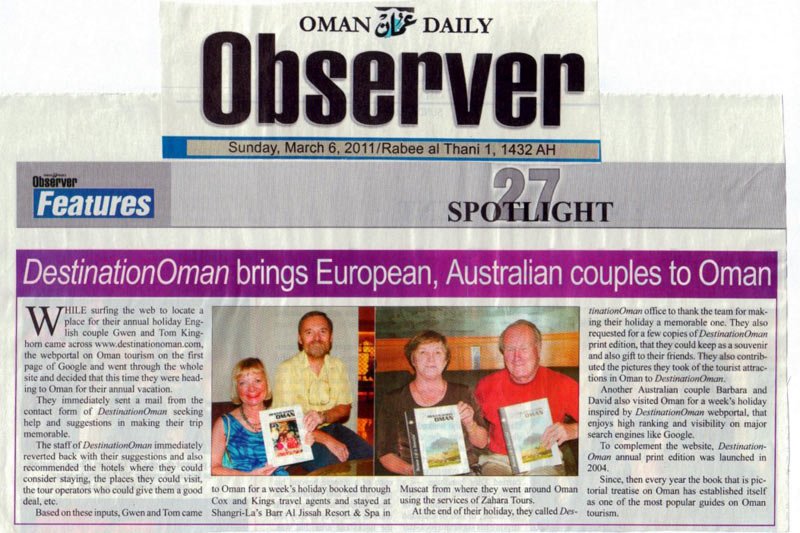